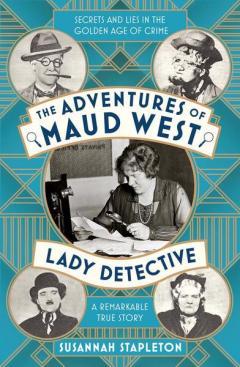 This is a very enjoyable account of a real-life female detective that reads like fiction. The author quickly realised that ‘London’s Lady Detective’ worked under a pseudonym and that her life story was going to be difficult to uncover. Maud West operated from around 1905 until the eve of World War II, when she shut up shop and to all intents and purposes, disappeared from the record. Piece by piece Susannah Stapleton slowly put Maud West’s biography together, but not without many dead ends and false leads, identifying her husband and children.

In between detailing the discoveries made about Maud West, the author talks about fellow women detectives of the era and the types of investigations they undertook. Store detective roles, arising with the coming of department stores was a position ideally suited for women, who could blend in with the customers. Women also worked on insurance fraud cases and did divorce work. One of Maud’s adverts stated boldly, ‘Every kind of Detective Work undertaken with Secrecy and Despatch. Divorce Shadowings, Secret Enquiries etc.’ Reading about this type of detective work provides a fascinating snapshot of social history before divorce in Britain became easier to obtain.

Maud wrote up some of her cases for the press, (which were syndicated world-wide) and examples of these are interspersed throughout the book. She was apparently an arch-publicist. The accounts are highly coloured with plenty of adventure and hugely entertaining. But how accurate were they? Apparently, the jury will have to remain forever out on that question. The author has tried to track down the details of cases that Maud has described, yet sadly not managed to verify them completely. Yet, Maud’s activities can be traced from court reports, her speaking engagements and her press advertisements. She seems to have run a successful business for many years before its closure and her peaceful retirement.

At times, you can feel the author’s frustration at the slow pace of the quest for Maud, but that doesn’t detract from a fascinating read. Hats off to those determined and courageous female detectives!