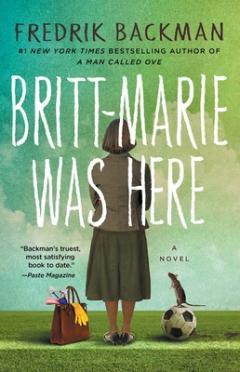 I was vaguely aware of A man called Ove doing the book club rounds but wasn’t much attracted by the subject matter. So when I pulled this off the worn-outs trolley here in Library HQ, in desperation for something to read with my morning coffee, I wasn’t expecting a lot. But I was slightly intrigued by the description of Britt-Marie on the back as a “pedantic, passive-aggressive busybody” who somehow ends up as coach to the local children’s football team in the miserable backwater of Borg – sounds a bit like Eleanor Oliphant (a book I really loved), I thought - let’s give it a go.

And it didn’t disappoint. Britt-Marie is, if anything, even more socially-inept than Eleanor. After 30 years married to a creep called Kent she is only now learning to interact with her fellow human beings, and her exchanges with the various newcomers to her hitherto sheltered life are highly entertaining. But there’s real pathos here too, and as Britt-Marie’s painful past is gradually revealed and you realise that all she has ever wanted is to be “seen”, you begin to root for her all the way, much like football supporters root for their team.

Which brings me to the second reason I loved this book – the football metaphor. As a quite recent convert to football fandom (thank you, Husband) and in the spirit of “If you can’t beat them, join them” I now find myself sitting on the edge of my seat week after week as Liverpool inch their way through various competitions. So when one of the characters explains to a puzzled Britt-Marie that, when her team’s goalkeeper keeps shouting “Let’s turn this thing around!” despite having let in 8 goals, it’s because his father is a Liverpool supporter, I nearly inhaled my scone. He then goes on to describe the 2005 Champions League final in quite purple prose, when Liverpool, hopelessly outplayed by Milan, were 3 down before coming back to win through the sheer force of will of one Steven Gerrard. I insisted on reading this to my husband in the pub just before the kick-off between Liverpool and Bayern Munich the other night and I swear I saw tears in his eyes.

I was further tickled to learn that the pessimistic Bank’s father was a Tottenham supporter - “If you support Tottenham you always give more love than you get back”; and that the hideous Kent supports United - “They always win. So they’ve started believing they deserve to” (though possibly not so much these days, ha!)

Backman is brilliant at describing people’s idiosyncrasies and, despite his tendency to exaggerate for comic effect, his characters come across as real, albeit often damaged. But that spirit of optimism, exemplified by Liverpool FC, comes strongly through this tale of one lost human being and one lost community finding in each other what they need most. Now where’s that Ove book?