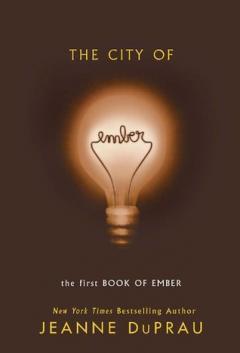 For over 200 hundred years the residents of Ember have lived in the city created by “The Builders” to save the last of humanity. They live surrounded by blackness with only the light from the, now failing, generator and know nothing but the city and jobs they are assigned. “The Builders” have given the residents just enough information to live their lives in Ember and nothing more.
Would you know a boat, a match or a candle, if you had never seen one before?
Friends Lina and Doon set out to try and save their city or find a way out of Ember, if there is even anything outside other than more black.

The 2008 film City of Ember, starring Saoirse Ronan, is one that I find myself re-watching whenever it pops up on TV and I have always wanted to know what happened to Lina and Doon after the film ended. But before I could read the sequel I had to read the City of Ember and enjoyed it as much if not more than the film.
If, like me, you want to know what happens next I recommend you read The People of Sparks and the The Diamond in the Darkhold. I skipped the third book in the series, The Prophet of Yonwood, as it takes place long before the events in The City of Ember.

Staff Pick By
Pia
Was this information useful?