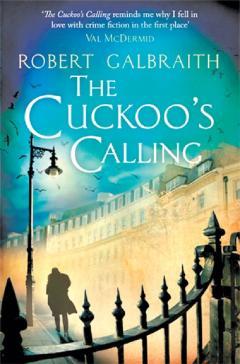 It’s taken me a while to embark on this series, the delay being due to the fact that I’m not really a Potter fan and have eschewed fantasy my entire reading career. I recall picking up The Philosopher’s Stone back in the day to see what the furore was about and realising very quickly that, magic wands and flying broomsticks aside, children’s books are best left to children. So why did I decide to give JK a go after all this time? Believe it or not because my friends suggested this as an antidote to Dublin Murders, assuring me that Cormoran (as in Cormoran Strike, the PI hero of these novels) is spelt without a “t” on the end, so my fear that shape-shifting would somehow be involved was groundless (truly I’ve been scarred for life by DM).

Who knew JK Rowling was such a good writer? Only pretty much everyone, I guess, but this, as well as being a gripping murder mystery, felt like balm to my soul. I’ve tried to analyse this and I think it’s because, despite it being set in the world of super-models, seedy film producers, frenzied paparazzi – all the paraphernalia of celebdom – the situations are recognisable, the characters relatable and the relationships authentic.

This is particularly true of Cormoran Strike and his sidekick Robin. I must say I did groan at Strike’s back story - he’s an amputee who was blown up in Afghanistan, just out of a toxic relationship with a beautiful Made in Chelsea type, and is now homeless and penniless (he lives in his office, a fact he tries to keep from his new assistant, Robin). On top of that we learn that he’s the child of a rock star and drug-addled groupie, so bound to be irrevocably damaged with an implacable hatred of humankind. Thank God Rowling has no truck with such clichés – Cormoran, despite all his troubles, is a decent fella who merely gets pissed and makes a show of himself down the local when things get too much, and Robin is a practical Yorkshire woman who comes to temp for him and quickly becomes indispensible.

Then there’s the setting, London, which Rowling has made seem almost cosy. Although her murder couldn’t be more modern – a supermodel plunging from a penthouse balcony – there’s an old-fashioned quality to her evocation of London. Whether it’s Cormoran having a pint and a pie down the Tottenham, brooding in his “garret” at the top of a winding staircase, or limping through the city on his prosthetic limb, it all feels just a tiny bit other-worldly - in a good way. It seems you can take the writer out of Hogwarts, but not… etc, etc.

I must also give a shout out to the actors Tom Burke and Holliday Grainger who so perfectly embody their characters in the BBC dramatization that you feel Rowling must have been writing with them in mind. Read or watch this, either way, a total treat.