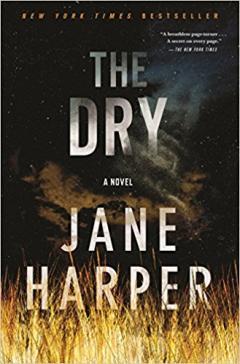 Australia is a country of extremes, that’s for sure. The last book I read set in Oz (Truly, madly, guilty by Liane Moriarty) began during a rainy spell lasting weeks - this one knocks that out of the water (excuse the pun) by having the farming community of Kiewarra driven half-mad by a drought that has lasted two years and shows no sign of ending. So arid and barren has the land become that the river, central to the history of this place, has just disappeared. It’s not that much of a surprise then to the struggling community that local farmer, Luke Hadler, took the desperate decision to end his own life – but why did he kill his wife and son first, leaving only his baby daughter alive?

The book opens with one of the most evocative crime scene descriptions I’ve ever read - I’m warning you though, put down that sandwich, blow-flies gorging on bloated corpses under the blistering sun to the sound of a baby crying are not conducive to the digestive process. We move quickly (and thankfully) on to the funeral and the entrance of our hero, Aaron Falk, childhood friend of Luke, who left Kiewarra under a shadow in his teens and is now a policeman in Melbourne. Determined to shake the dust off his boots and get out of Dodge as quickly as he can, Falk has only come back because of a letter he received from Luke’s father saying “You lied. Luke lied. Be at the funeral”. Well, I mean, how good is that? A few pages in and we know we’re in for not one but two juicy mysteries.

I allude to Dodge deliberately – this feels at times like a classic Western, from the moment Falk reluctantly enters town to be met on all sides by inimical glares and covert accusations from the locals, up to his climactic confrontation with his enemies, both of the human and elemental kind (I don’t think it was at high noon but still..) It’s also a terrific thriller – the two storylines, both past and present-day run in tandem throughout the book, racing to their individual dénouements without getting in the way of each other.

Critics are rushing to say what an assured debut this is from Harper and I agree – what I like about this book is that pace is not sacrificed for descriptions of nature, or vice versa. You’re never in any doubt where you are – this is the Australian outback I remember from favourite shows from my youth like A Country Practice and The Flying Doctors, complete with authentic vocabulary; “ute”, “arvo”, “eskie” (what is an eskie, I’m still no wiser?) and peopled with work-hardened, hard-drinking, uncompromising characters, some with hearts of gold, some less so. Could this be the first in the Aaaron Falk crime series? – I certainly hope so.