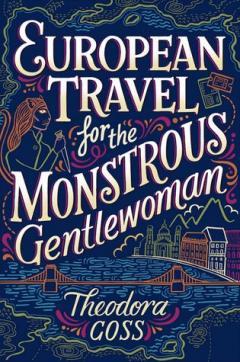 European Travel for the Monstrous Gentlewoman

This is a splendid mash-up with a feminist slant, set in late Victorian London, Vienna (via an eventful journey on the Orient Express) and Budapest. The book centres on the members of the Athena Club: Mary Jekyll, Diana Hyde, Justine Frankenstein, Caroline Moreau and Beatrice Rappaccini who are all victims of scientific experiments by their respective fathers/creators. As you might just be able to tell, Goss has been inspired by a few classic novels, borrowing and adapting a few characters to create a very readable romp. This is actually the second in a series, though I didn’t realise that when the title caught my attention. It doesn’t really matter whether you’ve read the first one, references to previous adventures don’t detract from following the events in this adventure.

The club receives a letter from Mary’s old governess Mina Murray, asking for help on behalf of Lucinda van Helsing who is being experimented upon by her father. If you’ve read Goss’s literary sources, you could hazard a guess as to the nature of the experiments. Abraham Van Helsing is a member of a secretive group called The Society of Alchemists, who are committed to pushing the bounds of science, but who are not too worried about small concerns such as ethics. Our intrepid band of monstrous women are determined to prevent any more experiments. They have help from several quarters including from Holmes, Watson and Irene Adler, the latter now living in Vienna. I will leave readers to discover for themselves which other fictional characters pop up in a re-imagined version of themselves.

Goss’s book is a lively page turner and playing spot the character is an entertaining bonus. However, I could have wished that Diana Hyde was a slightly less irritating person (blame the parent perhaps?). I would also quibble about the anachronisms in speech, if it was intended (many of them are Diana’s) I don’t think it adds anything to the style of the novel. I think it detracts from the sense of period, regardless of how well the author describes London, Klimt’s painting or a Hungarian schloss.