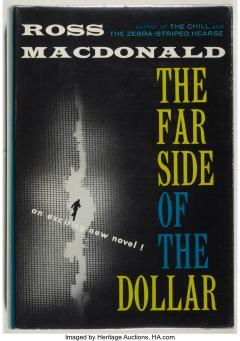 Far Side of the Dollar

Between 1949 and 1976, Kenneth Millar under the pen name, Ross MacDonald, brought to life Lew Archer, a compassionate private eye in San Francisco and one of the most interesting of all fictional investigators. The Far Side of the Dollar was written in 1965 and is the 12th in a series of 18. Lew is asked to investigate the disappearance of a wealthy teenager from an exclusive reform school. Instead of finding the teen, Archer discovers a dead body and is met with a complete lack of cooperation from all interested parties. MacDonald's characters are well developed and his writing is compelling.This is hard boiled detective fiction with added psychological depth. If you like this, make sure to check out the rest of the splendid series.