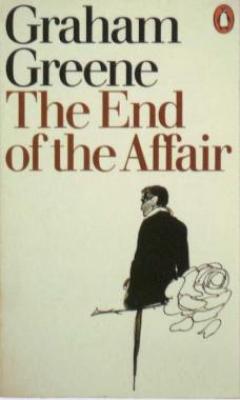 End of the Affair

A tale of adultery, love, lust, hate, guilt and God, The End of the Affair is obviously based loosely on Greene's own life. It's well known that Greene, a Catholic, had an affair with Lady Catherine Walston, the wife of the Labour peer Harry Walston, and that has heavily influenced the novel's main characters Bendrix and Sarah….. [Spoiler atlerts!] Sarah is married to a civil servant but begins a passionate affair with the writer Bendrix. The affair ends suddenly and Bendrix becomes obsessive, wanting to find out why it came to an end. They meet again some years later but Bendrix is full of jealousy and hate - not just for the other men in Sarah's life, but also for the God Sarah has become close to; a God Bendrix refuses to believe in. Sarah dies, leaving Bendrix with many questions to answer. Set during the Blitz, it's a moving novel which does a great job at getting inside the mind of a tortured man. I thought some storylines were a little unlikely - Sarah's husband Henry becomes very friendly with Bendrix even though he eventually finds out what is going on but then again, Henry is an unusual character romantically and his passion for Sarah is obviously in question. Not a tale for those who like a book to finish all tied up with a happy ending, but a touching novel nonetheless. It's a short enough book and a good introduction to Greene's style if you are unfamiliar with his work.