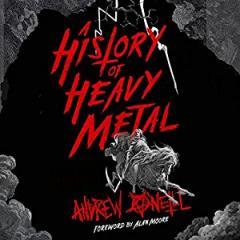 A History of Heavy Metal

I was vaguely familiar with Andrew O’Neill before I picked up the book from the stash of new books that arrived in our branch. As a transvestite chaos magician metalhead he owns his distinctive niche in the world of stand up comedy and I had watched some of his sets on youtube.
The book is a distillation of his popular stand up show of the same name. Beginning with the roots of the genre in soul music and early rock n roll it traces the metal genre from its infancy to the confusingly multi faceted beast it has become. Whilst an obvious pre disposition to being interested in heavier music may pique ones interest in the book, it is not at all necessary. Rather than being a dry academic text it is instead funny, accessible and at times unashamedly opinionated though it must be said Andrew is still very fair towards acts and movements that are not his cup of tea. This is a very personal history and that’s another aspect that makes It enjoyable. It even got the endorsement of comic book legend Alan Moore who said “ a comprehensive landmark analysis of an enormous area of music that has been too long without such a thing, and has the massive advantage of the funny being turned up to twelve

Staff Pick By
Paddie
Was this information useful?