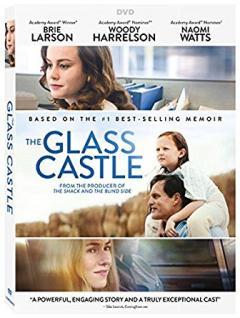 Upon publication back in 2005, “The Glass Castle” by Jeanette Walls was one of my go to recommendations for readers who enjoy biographies and memoirs, so I was intrigued to hear that it was being made in to a film. I was also happy to hear that it starred one of my favourite up and coming actors Brie Larson who I first spotted in “Trainwreck” and then in her break out and Oscar winning role in “Room”, another Book to Film adaption. The DVD arrived in to the library recently and it caught my eye so I borrowed it and watched it last weekend.
The book is a tough read due to the issues it covered. However, it was so beautifully and well written that it drew me in and moved me as the reader. The film is an even more difficult watch than the book was to read, and I found it really harrowing in parts. There are parts that are uplifting and joyous but equally there are parts that are not. Seeing the parents in the film choose to indulge in their own artistic endeavours or feed their addictions rather than feed their own children I felt so frustrated by the unfairness of the life the children were experiencing due to the actions of the parents. While the book stayed on the best seller lists for years I don’t know if the movie will go down as a classic. However, with a great cast, this is a good film that is certainly enjoyable in parts as the children experience an adventurous free spirited life however it is perhaps not something to watch if you are looking for a light and entertaining film.
Available from dlr Libraries now – check online to see if it is in your branch or place it on hold and you will receive an email or text to let you know when it is available for collection in your chosen branch.

Staff Pick By
Enid
Was this information useful?