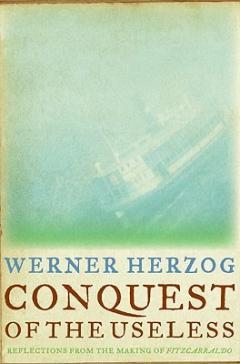 Conquest of the Useless

In 1979, German director Werner Herzog ensconced himself deep in the Peruvian jungle in order to begin filming "Fitzcarraldo" - his portrayal of would-be rubber baron and opera devotee, Brian Sweeney Fitzgerald (an Irishman known in Peru as the eponymous ‘Fitzcarraldo’) who dreamt of building an opera house in Iquitos, a town nestled in the within the teeming depths of the Peruvian jungle. In order to achieve his dream, Fitzcarraldo is determined to transport a steamship over a steep hill in order to access a rich rubber territory in the Amazon basin. Herzog's uncompromising artistic vision demanded that he and his crew perform the exact same feat for the making of the movie.

Never one to accept half-measures, Herzog details the oft-monumental struggle involved in the attainment of the goals demanded by his relentless vision and work ethic. He and his crew face seemingly-impassible obstacles: the unpredictable vagaries of native life, contractual and financial uncertainties and most of all, the incessant and unpredictable trespass of the jungle’s flora and fauna that ceaselessly conspires against any sort of attempt for the crew to civilize their environment. As the jungle takes hold of the men, more and more plans come to nought. Financial struggles abound. River levels surge and constrict, forcing construction to halt, supplies and transport and staff to go AWOL. The schedule and relentless environmental pressures prove too much for both actors and crew, many of whom defect, crushed by the hardships imposed by the jungle.

One man perseveres throughout – Herzog himself – and this diary is his typically idiosyncratic and frequently hilarious document of this period, a time in which he faced a severe test of his unswerving commitment and artistic vision. The jungle pushes Herzog to become intimate with the limits and extremes of man’s uneasy relationship with himself and nature at large – making for a very strange paradise. A fascinating testament to the power of endurance, commitment, artistry and the resolve of the human spirit in the face of insurmountable odds.

Staff Pick By
Graham
Was this information useful?