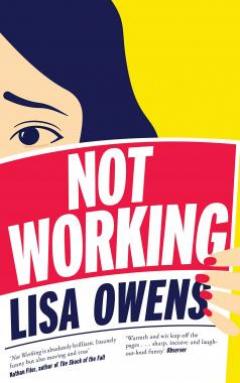 Not working addresses that dilemma of graduates everywhere: Having studied for years in the hope of achieving fulfilment and satisfaction in your working life what do you do when you reach the end of your 20s to find it all just a bit so so? Is it churlish and ungrateful to expect a bit more and actually go looking for it? After all, Claire Flannery would appear to be on the pig’s back from many readers’ (including this one’s) point of view; she has a “good”, reasonably well-paid job in “creative communications” and a trainee brain surgeon boyfriend with a near-saintly disposition, with whom she owns a flat in London, no less. As her grandmother says, with masterly condescension, “I remember what being your age was like – of course, I had four children under eight then, but modern life is different, you’ve got an awful lot on.”

Not strictly in diary format (it’s written in a series of episodic entries with titles like “Communication breakdown”, “Tube”, “Hairdresser”, etc., instead of dates), this is nevertheless in the tradition of those well-loved diarists and observers of modern life, Adrian Mole and Bridget Jones, but with more heart and intelligence. Most novels about twenty-somethings concentrate on love as the elusive element that will give their existence meaning, so kudos to Owens for acknowledging what those of us who are further on in life have found out the hard way – work matters. Seized with a sudden desire to start swallowing the things on her desk “drawing pins, lumps of Blu-tack, whatever fits in my mouth” Claire hands in her notice and begins her odyssey to find her perfect career.

This doesn’t sound like the most riveting premise; job-searching – hardly the stuff of high drama, and finding oneself – shudder, need I elaborate? Thankfully this is neither dull nor self-indulgent, though Claire finds being jobless no picnic and that having time on her hands doesn’t mean she’ll ever finish Ulysses, or even make up her mind what to do about the buddleia growing out of her front wall – is it choking the foundations or holding the whole edifice up? (Metaphor alert!) She also has to contend with everyone giving her the benefit of their opinion – most of it negative – and the isolation of feeling out of synch with the rest of the world. In a darkly humorous subplot, whereby she casually mentions at her grandfather’s funeral that he used to expose himself to her as a child, she creates an estrangement with her mother just when she needs her support, plus boyfriend Luke’s utter certainty about his path in life is becoming more and more irritating – will their relationship survive?

This is a funny/ serious look at the quarter-life crisis that many now experience in a world which seems to offer so much choice (career, travel, marriage, babies) it can feel overwhelming. Although it doesn’t offer any definitive answers it does add something interesting to the debate.