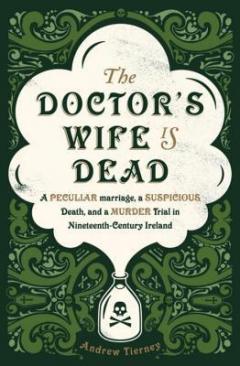 The Doctor's Wife is Dead

I thought I’d review a non-fiction book this week and, as true crime is my guilty pleasure, I’ve chosen this account of a little-known murder trial that took place in 19th century Tipperary to see how it compares with the flood of books that have appeared in recent years on more sensational murder cases (Catherine Nevin, the ScissorsSisters, etc. - I’ve devoured them all). Well-written and informative, this shines a light on the lives and attitudes of gentrified society in famine-era Ireland while reading like a true gothic mystery (shades of Edgar Allan Poe in more ways than one, as the Poe family of Donnybrook, Co. Tipperary, was actually related to the unfortunate doctor’s wife of the title).

The book begins with an intriguing premise; why would the esteemed Dr Langley send a letter to the town coroner of Nenagh to request an inquest into the death of his wife, Ellen, while she was still alive? Secondly, why did he send his dreadfully ill wife from her home to stay in much-reduced circumstances in local lodgings at a time when cholera was rife throughout Ireland, just weeks before her death? Immediately the reader recognises that the good doctor might bear some scrutiny – and boy does he deliver in terms of ego-maniacal, tyrannical and, quite possibly, psychopathic behaviour. By the time the inevitable other woman comes to light (she’s none other than Ellen’s young niece), as well as his attention-seeking antics in prison while awaiting trial, you feel that this could be something you’d read about in a Sunday tabloid.

Amid lurid descriptions of the character and deeds of Langley it is almost easy to forget Ellen, whom he systematically and with great cruelty ground down until she died half-starved, isolated, abandoned and maligned. Described as silent heroine, mute ghost, history tells us nothing about her motivation in marrying Langley (she was substantially older than him) or how she felt as his true character became known to her, but Tierney does a good job of somehow keeping her central to the story.

I wish I could say (as I’m sure Tierney, a distant descendant of Ellen Poe, does too) that there was any kind of retribution for her, but in a time when women (even genteel Protestant women) had no status whatsoever this was not to be. But he can be comforted in the knowledge that this book has at least restored her much-prized good name. One thing I personally was intrigued by (as my father’s family is from Tipp); the idea that Tipperary, out of the whole of Ireland, was considered particularly bad-ass in the 19th century, like Chicago during the twenties – who knew?!

This is Tierney’s first book and as an historical, true-life who-dunnit I think it’s up there with Kate Summerscale’s books – and if you’ve read any of those you’ll know what a compliment that is.