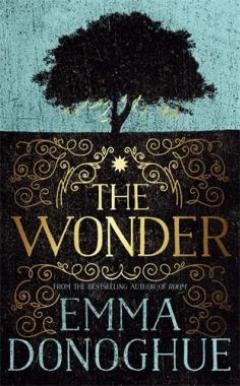 I’m back in famine-era Ireland this week (or slightly after), this time fictionalised though based on true events. If you haven’t read Emma Donoghue’s latest I strongly advise that you don’t google it beforehand because if, like me, you’ve read nothing about the background to this story you’ll be properly gob-smacked by the mystery at its centre.
7 or so years after the last potato blight devastated the area, word is spreading from a small-holding near Mullingar that 11 year-old Anna O’Donnell has been subsisting for months without food. Could she be a saint, a miracle, a true wonder? Before the Catholic Church can claim her as such Lib Wright, a Nightingale nurse who served in the Crimea, is employed to keep a 2 week watch over the child in order to uncover the truth. A pragmatic, scientifically-trained widow from middle-class England, Lib is horrified by rural life at the “dead centre of Ireland”, with its religiosity, superstition and god-awful diet – at one point having endured another barely edible, peat-infused meal she asks “Did the Irish hate food?” (I couldn’t help but be amused reading this in an era when we Irish have embraced all things foody, and can bang on about wilted greens, vine-ripened this and pan-seared that with as much pretension as the best of them).
However, there’s little light relief elsewhere – the atmosphere is brooding and the suspense is expertly maintained and heightened through claustrophobic descriptions of the tiny room where the watch takes place. In fact these accounts of each long day of Lib’s careful vigil and meticulous examination of her subject and surroundings should feel repetitive and monotonous, but the opposite is true – you’re on this mission with her all the way, from an initial determination to expose this money-making hoax to rooting, not just for her, but for the child who is presumably perpetrating said hoax. This is Donoghue’s strength which we’ve seen before in Room, the ability to take sensational subject matter and humanise it, to somehow get to the heart of and make sense of the big news story.
Her other great talent is invoking specific times in history – like any good Irish citizen I feel I know my Famine, but until I read this book it never occurred to me to wonder what it’s physically like to experience starvation or to live your whole life one blighted potato away from death. At one stage Lib realises “A child now 11 must have been born into hunger. Weaned on it, reared on it…” Although this is based on true events it was a stroke of genius for Donoghue to transport one of the “fasting girls” to Ireland - the juxtaposition of Anna’s anorexia with the recent death of a million people from famine is grotesque but unquestionably thought-provoking.
Like with Room you could be put off reading this book by the subject matter – Don’t! This is ultimately life-affirming and the “Wonder” of the title has more meanings than one.