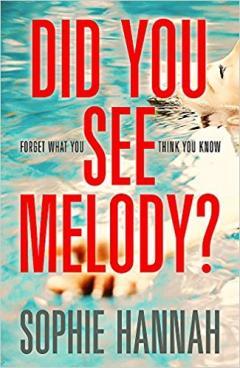 Did you see Melody?

If you’ve read any of Hannah’s other books you’ll know what to expect here; a well-setup premise, various intriguing and seemingly unrelated characters, red herrings (or are they?) abounding, and tangents going off in all directions. Sophie Hannah’s thrillers are busy, to say the least.

I have to be honest, having binge-read her earlier Culver Valley novels I stopped after about the fifth, feeling they weren’t good for my health – to me they’re the equivalent of bad TV – you just want to shout “You cannot be serious!” at the screen, sorry book, half-way through, such is your frustration at the convoluted and unrealistic plot-lines. This one, though, has critics lauding it as a return to form, plus it’s a stand-alone and set in America, so I decided to give it a go.

Look, there’s loads of good stuff here. An English woman fleeing from unnamed domestic problems to a luxury resort in Arizona (as you do) encounters a 14 year-old girl who has been presumed dead for 7 years, murdered by her parents who are now serving life sentences for their crime. As always, Hannah sets the scene excellently and at first you’re eager to figure out (or even keep up with) the dizzy-making plot, but somewhere around page 160 it seems to go completely off-piste and you wonder with some alarm if she’ll ever be able to rein it all in and get it over the finish-line.

She does, just about, but you have to be prepared to suspend a heck of a lot of disbelief as every far-fetched and far-flung strand is dragged into place for the final dénouement. But there are some good reasons to read this book; the description of the Swallowtail resort with its relentlessly up-beat and sycophantic staff feels spot-on, and the bickering mother and daughter double-act of Tarin and Zellie Fry, Cara’s only allies, is highly entertaining. Hannah obviously gets inspiration from news stories and real-life crime cases which she plunders for her novels, and the main theme here seems to be America’s propensity to trial by the media. There are nods to OJ Simpson and the Casey Anthony case - she calls America “Land of the Hyperbolic Overstatement” and wonders if the flipside of that is a kind of relishing of “evil monsters” – a phenomenon hardly confined to the US. But the big stumbling block for me was the finding of Melody’s parents guilty of her murder on no evidence whatsoever – I would like to believe that couldn’t happen whatever the feeling on social media, and if it did that they would surely have gotten out on appeal.

It’s a pity I couldn’t bring this on holidays with me (as it was only in hardback then), as I think I might have appreciated it more and found the more tortuous plot-lines easier to follow lying on a sun-lounger with a cocktail in my hand.