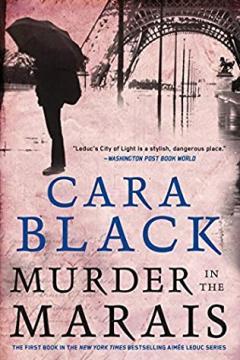 Murder in the Marais

Meet Aimée Leduc, a stylish Parisian private investigator. She is born to an American mother and a French police investigator,she runs a cybersecurity firm with René, her friend from university. In Murder in the Marais, an elderly Jewish man asks her to do some highly senstitive decoding on behalf of a woman in his synagogue. Upon dropping the findings to her client's house in the Marais, Paris's historical Jewish quarter, she finds the woman murdered with a swastika carved in her forehead. As she and René seek out the killer, more murders follow. The Parisian landscape and atmosphere is described in realistic detail. Savvy and tough, Aimée has a fondness for Chanel outfits but she can only afford them secondhand from charity shops. If you enjoy Murder in the Marais, you will be pleased to know that it's the first in a series of nineteen to date. Each of her stories is grounded in historical reality and set in a different Parisian district.

Staff Pick By
Sean
Was this information useful?