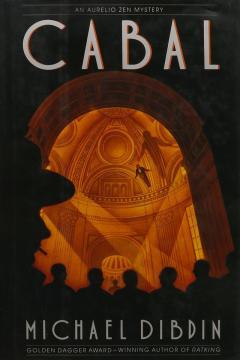 Meet Aurelio Zen, an Italian anti-hero detective. In Cabal, 1993, Zen is summoned to assist the Vatican in the investigation of an apparent suicide of a prince, who falls from one of St. Peter's balconies. Initially, Zen agrees with the verdict of suicide but the murders of a series of witnesses forces him to dig deeper. Dibdin is a superb writer. This really is a fantastic and pacey story with lots of intricate twists and turns. Zen himself is a very engaging and complex character with an intriguing private life. Dibdin also excels in his portrayal of the labyrinthine and frequently corrupt bureaucratic and political background that Zen must negotiate to survive. Cabal is the third book in a series of eleven featuring Aurelio Zen. The fact that each is set in a different region of Italy further adds to the enjoyment of reading them. If you like reading Donna Leon or Andrea Camilleri, then you really should try Dibdin.