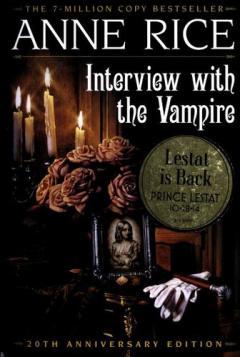 Interview with the Vampire

The current fascination with vampires in popular culture probably begins with Interview with the Vampire rather than Bram Stoker’s Dracula. It’s not hard to see why. In Stoker’s novel, Dracula is a charismatic figure, but one that is a threat to the patriarchal values of Victorian society and in a sense, he represents the challenges that social change presented to the author and his society. Most of his victims are women and he is destroyed in the end by a group of men, representative of the elite at that time. Rice presents a more sympathetic and psychologically complex picture of the vampire. In Interview with the Vampire she presents the reader with an interesting thought experiment – how do you live your life for an eternity? Indeed, a persistent theme in this work is that of loneliness, the need for all beings, human and immortal to connect. The novel opens with a vampire, Louis de Point de Lac being interviewed by a reporter who remains unnamed and is referred to throughout the work as only ‘the boy’. In a first-person narrative, Louis tells him about his two hundred years of life as a vampire. As a mortal, he had been an indigo plantation owner in Louisiana who when his beloved brother dies looks for ways to end his life. He is approached by a vampire, Lestat de Lioncourt who seeks him as an immortal companion. Lestat turns him into a vampire but Louis struggles as one of the undead, preferring to prey on animals rather than humans. They remain together for many years, but deep differences remain between them which go on to have tragic consequences for them both. Rice draws characters with real psychological depth; one can readily understand the challenges that immortality might place on a being with supernatural powers. Each confronts the challenge of immortality from the perspective of two very different personalities. Louis never fully accepts his vampire nature, remaining sympathetic to the vampire’s victims and also feeling like an outcast not only from humans but other vampires as well. The amoral Lestat has no such qualms, seeing a ready supply of human blood as his due. Yet each needs the other and is anxious to avoid loneliness at all costs. Though its characters might at first seem strange and indeed, in Lestat at times repellent, Rice in this novel explores the deep need for genuine and long-lasting intimacy that all beings share with each other and the fear of what may befall them when they become outcasts. In following Louis’ struggles with immortality, the reader learns oddly but movingly from a vampire the advantages of human mortality.