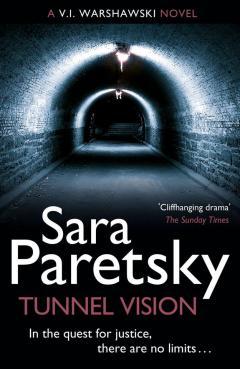 V.I. Warshawski, the daughter of a Polish police officer and an Italian music teacher, is a complex, hard boiled and impoverished P.I. living in Chicago's downtown neighbourhood. Published in 1994, Tunnel Vision is based on the 1992 flooding of the tunnels under the Loop in downtown Chicago. V.I. comes across a homeless woman and her children in the basement of her derelict downtown office building. She mentions the family to Deirdre Messenger, a member of a shelter for abused women. When Deirdre's body turns up in V.I.'s office, she is up to her neck unravelling the lies and politics around the murder. This book has a lot of twists and turns in it. Paretsky is particularly strong on plot and delves into social and personal issues. In the eighth outing for V.I., daily life in Chicago is brought to life and described in loving detail. The enjoyment of Tunnel Vision and the rest of the series is greatly enhanced by a wonderful set of supporting characters who help V.I. solve her mysteries and lead an interesting life. These include her elderly neighbour Mr. Contreras; her friend and doctor, Lotty and an investigative journalist, Murray Ryerson. If you enjoy this, make sure to check out the rest of the series. The 20th instalment was published in April 2020.