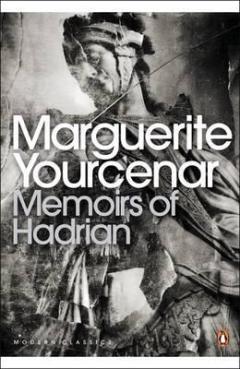 Marguerite Yourcenar (1903-1987) was the first woman elected to the Academie Francaise and a writer of great erudition, fluent in Latin, Greek and Italian as well as her native French. She was introduced to Classical Literature by her father, Michel-Renne Cleenewerck de Crayencour, a minor French noble who actively encouraged her literary ambitions. The Memoirs of Hadrian is her best- known work in the English-speaking world, an instant success when it was first published in 1951. The work had a long gestation. Yourcenar first contemplated writing a novel based on the Emperor’s own autobiography that was lost in antiquity. She worked on various drafts in the 1930s but on the outbreak of World War Two, Yourcener then in America, was separated from her manuscripts which she had left behind in Europe. In America she wrote little, enduring a severe period of writer’s block turning instead to teaching. Finally, in 1948 she was reunited with the trunk containing her manuscripts and re-reading her work from the 30s, was fired with enthusiasm and set to work. She researched a great deal for the revised version of the novel as she reveals in an interesting postscript which accompanies the novel, but based her work chiefly on the two main surviving sources for Hadrian’s life, the Historia Augusta and Cassius Dio’s, Historia Romana. The result is a philosophical novel of great depth.

It opens with the elderly Hadrian reflecting on his incurable illness, a heart condition from which he is shortly to die and goes on to take the form of a letter to his chosen successor, Marcus Aurelius who would go on to write his own famous Meditations. In the chapters that follow, Hadrian reflects on his idyllic childhood in his native Spain, the first trip to Athens where he discovers a love for Greek culture and philosophy that is to remain with him for life and his first years in Rome where he joins the army and enters the circle of the Emperor Trajan. Hadrian gradually gains Trajan’s favour but during the Sarmatin Wars, becomes appalled at the violence that accompanies the Emperor’s policy of expansion, but shrewdly works to conceal it and thus, guarantees his succession as Trajan’s heir. On becoming Emperor, Hadrian abandons the policy of expansion in favour of one of consolidation and by initiating legal and economic reforms hopes to bring in a golden age of peace. He also makes frequent tours of his empire and on one such journey meets the love of his life, Antinous. The Emperor is now truly happy, traveling enjoying the varied cultures of his realm but this idyll ends with Antinous’ mysterious death in the Nile. In the years that follow, Hadrian is disillusioned as his hopes for a new golden age fade with revolts in his realm, particularly Judea which he brutally suppresses. In his final years, he contemplates suicide, but decides against it, preferring to accept his fate with resignation.

Throughout the narrative of his life, Hadrian frequently makes asides to reveal his enthusiasm for Greek art, culture and literature. He also reflects on life, relationships and above all time, perhaps the overriding theme of the novel. The man that emerges from this is a sympathetic figure, one that in spite of his elevated status as a semi-divine Emperor, is still in the end a mortal man, battling the loss of youth, health and love like all his subjects. He is a shrewd observer noting:

"Like everyone else I have at my disposal only three means of evaluating human existence: the study of self, which is the most difficult and most dangerous method, but also the most fruitful; the observation of our fellowmen, who usually arrange to hide secrets where none exist; and books, with the particular errors of perspective to which they inevitably give rise."

In the Memoirs of Hadrian, Yourcenar manages an amazing feat of literary time travel, bringing us to an amazingly reconstructed ancient world, but also introduces us to the mind of a remarkable human being as he reflects on the extraordinary life that he has led.