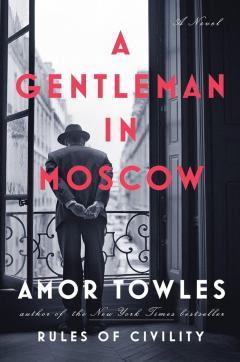 A Gentleman in Moscow

A book about house arrest, now doesn’t this sound familiar. This novel is set around a Russian count Alexander Ilyich Rostov sentenced to spend his life under house arrest in The Metropol Hotel, one of the most exclusive establishments in 1920s Moscow.

What follows is a diary of thirty years penned by the charming Alexander from the confines of this hotel located next to the Kremlin. Part historical novel and part thriller this book will take you on a journey from the formation of the Soviet Union up until the death of Stalin.

The interior of the Metropol expands with the introduction of every character and each decade the Count spends with in its walls. The description of the interiors, staff, friends and acquaintances of Count Alexander smolder and then explode on to the page. Characters who seem insignificant in the beginning of the novel morph into leading roles as the novel picks up pace and some characters you thought important to the plot just disappear. This book is a duel between love story and political thriller, Amor Towles captures the essences of a changing Russia from the party politics to the personal hardships and paranoia created by the communist regime.

Travel to Russia at the beginning of a new era, experience the luxury of the Metropol in all its 1920s glamour. Step into the shoes of a charming exiled Count without leaving the comfort of your armchair. Even Bill Gates gives this one the thumbs up, saying it gives a new perspective on this era of Russian History.

I found it charming, engrossing and it will keep you guessing even when you finish the last sentence. If you would like to find out more about this novel and Amor Towles, one-time hedge fund manager turned author check out www.amortowles.com

Staff Pick By
Trish
Was this information useful?