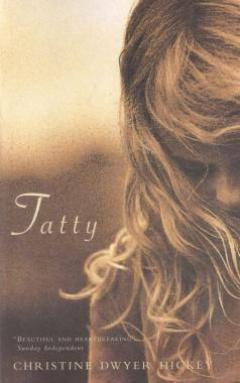 The story begins in Dublin in 1964, when Tatty is nearly four and the extended family is celebrating the christening of baby Luke. Tatty is sure that the baby has just begun to see properly, ‘Or nearly see anyway. He’s all excited, squinting and blinking, his little tongue sticks in and out. His little finger scrabs the air like he’s pulling away the last bit of veil, and his feet punch the end of his dress’. It is a lovely, evocative image with which to begin the story.

Tatty continues narrating the family’s story up until 1974 by which time she has learned much about life and her parents’ escalating problems. Reading the story, as told from a child’s eye view draws you into the family scene, to be a close witness of the unfolding dramas. You hear about the family relationships and happenings through the filter of a child’s understanding of what is going on. As the years pass Tatty begins to comprehend more and more, although she is still unwilling to face the truth as forcefully told by her sister Jeannie.

I found it interesting that there was a different view taken of the mother’s drinking habits compared to the father’s pub visits. What shows clearly is that there was little to no understanding about the tolls of pregnancy and child rearing. Particularly as one of the children, Deirdre had special needs, needing permanent attention. The situation was seen as something she had to get on with, while her husband remained free enough to frequent pubs and racecourses (on one occasion going on a Paris trip, somewhere she would have loved to visit). Seemingly the father was also able always to play the good cop role in his relationship with Tatty, so he was her favourite parent.

This is a very readable story, a quick read, but one that gives you plenty to think about. I would love to know how Tatty and her family’s life shapes up in the future. It is both a funny and a sad story, as real lives generally are. The technique of telling the story through a child’s eyes is highly effective here and Christine Dwyer Hickey gets the tone exactly right. I have only ever read her short stories before, but I will certainly go on to read more of her novels.