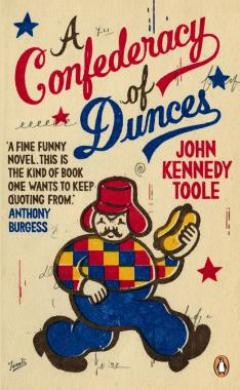 A Confederacy of Dunces

It is hard to believe that this novel, now a cult classic, was almost not published and that it was only the persistent efforts of the writer’s mother, Thelma, that saw it into print. Disheartened at being unable to have the work published, Kennedy Toole took his life and left behind a smeared carbon copy of the original manuscript that his mother discovered following his death. Thelma never gave up on the novel and eventually persuaded Walker Percy, a lecturer at Loyola University in New Orleans, to read it. Initially reluctant he was soon captivated by it and wrote the introduction to it when it was finally published in 1980. It won a posthumous Pulitzer Prize for Fiction in 1981 and is now regarded as one of the great comic masterpieces of American literature of the latter half of the twentieth century. The Confederacy of Dunces is a picaresque novel, following the misadventures of the educated, but eccentric and slovenly thirty-one years old Ignatius J. Reilly as he unsuccessfully battles the modern world in early 1960s New Orleans. Reilly disdains popular culture which he analyses through the prism of medieval scholastic philosophy and in particular the work of the philosopher Boethius. He invariably attributes his misfortunes to a higher power and laments how the goddess Fortuna has spun him downward on her wheel of fortune. Initially indulged by his long- suffering mother, Irene, Reilly’s world begins to come apart when she asserts herself following a series of mishaps and forces him to look for work. The novel follows Reilly as he attempts to hold down jobs in the office of Levy Pants and later as a vendor of hot dogs. Reilly’s hilarious delusions of grandeur invariably undo him and also those unwise enough to employ him. He hopes to remake the world in his image and reveals his plans in an intermittent correspondence with an old college friend Myrna Minkoff. Myrna is the polar opposite of Reilly in her views, embracing socialism and liberal attitudes to sex that appal him and he dismisses her as “that minx”. Yet a strong mutual fascination exists between the two and in their respective schemes each clearly sets out to impress the other. The novel has a whole host of interesting, often eccentric and bizarre characters, such as the comfortably off Claude Robichaux always looking out for “communiss”, Santa Battaglia, Irene’s friend who detests Reilly, and her nephew, Angelo Mancuso an incompetent police officer who after an abortive attempt to arrest him as a “suspicious character”, is regarded by Reilly as his nemesis. The novel is also a wonderful evocation of the city of New Orleans itself, and in particular Yat, the dialect of English spoken there. Few novels capture so well how the unpredictability of life can be itself ridiculous rather than tragic and in The Confederacy of Dunces, Kennedy Toole creates a work worthy to stand beside such great comic works as Sterne’s The Life and Times of Tristram Shandy.