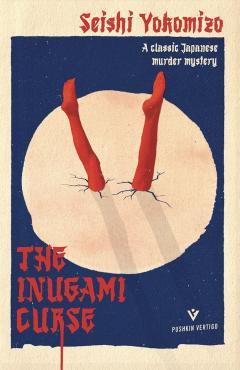 This is a fiendish murder mystery by celebrated Japanese crime writer Seishi Yokomizo (1902-81), which has only recently been translated into English and published by Pushkin’s Vertigo imprint. The book, set not long after the war features Yokomizo’s eccentric detective Kosuka Kindaichi who appears in seventy-seven of his crime novels, the first of which was published in1946. In this story, Kindaichi has to solve a series of bizarre murders, but first he has to figure out ‘whydunit’ before he can see ‘whodunit’.

The crime scene is the Inugami family’s extensive property on the edge of Lake Nasu, an idyllic spot for a murder or two, especially enveloped in the winter snows. The family however, is not a happy one, the situation aggravated by the complicated will of the recently deceased Sahei, head of the Inugami clan. Sahei leaves three daughters (by three mistresses) who all loath and distrust each other, Matsuko, Takeko and Umeko. Husbands and offspring complete the not too cosy family circle. This is akin to an Agatha Christie country house murder mystery, where all sorts of family rivalries and secrets make a very murky picture.

As Sahei has stipulated that all of the family must be present for the reading of his will, the family await the repatriation of Matsuko’s son Kiyo from his wartime service. But when Kiyo eventually returns, he is wearing a mask to hide his scars from severe facial injuries. After a while the family begin to wonder if he is the real Kiyo, as there is so much at stake. But if not Kiyo, then who is he? The other critical player in the drama of the will is Tamayo Nonomiya, a beautiful young woman who is the granddaughter of Sahei’s old master. The family are aghast to discover that Tamayo is a major beneficiary in Sahei’s will. Why has he done this?

The revelation of the intricacies of the will seems to trigger a spate of murders. Kindaichi has his work cut out to uncover the web of family secrets and hidden identities that lead to the murders. There are plenty of twists and turns in the plot and Kindaichi is an engaging amateur detective, who deduces the identity of the murderer ahead of police chief Tachibana (naturally). He also turns out to be a better skier than the police chief in a chase over the mountains!

This is a very entertaining mystery, peopled with a seriously dysfunctional family. The style is elegant and the atmosphere is as brittle and chilly as the winter ice. The period detail of the social mores in Japanese society is a bonus.