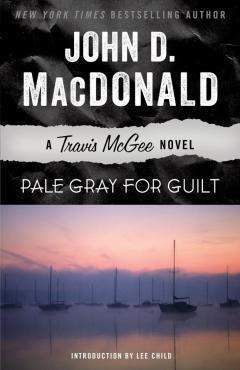 Pale Grey for Guilt, published in 1968, is the ninth novel in the Travis McGee series by John D. MacDonald. McGee is neither a police officer nor a private investigator. Instead, he describes himself as a "salvage consultant" who recovers others' property for a fee of 50%. The plot revolves around McGee's investigation in to the death of his close friend Tush Bannon, who he suspects was murdered to acquire his waterfront property when he refused to sell to developers. Together with his friend, Meyer, a respected economist, McGee sets out to take revenge on his friend's killers. MacDonald weaves an intricate plot and is wonderfully adept at describing the Florida setting of the plot. MacDonald is acknowledged to have been ahead of his time in addressing issues of environmentalism and this novel is no exception. McGee himself is a very distinctive character, a philosophical man of action, who lives on a houseboat called the Busted Flush in Fort Lauderdale, Florida. If you enjoy this, be sure to check out the rest of the series, published between 1964 and 1984.