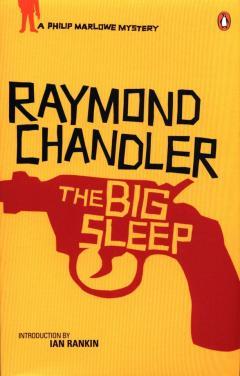 Raymond Chander was a failed oil industry executive who turned to writing pulp detective fiction to make ends meet. The Big Sleep was his first novel, produced by combining several of his previously published stories and introduced his private investigator, Philip Marlowe, to the world. It has since become one of the corner stones of noir crime literature and was memorably filmed in 1949 by Howard Hawkes with Humphrey Bogart and Lauren Bacall. The novel has a labyrinthine plot in which characters have multiple secrets and double cross each other. Marlowe is called in by the elderly General Sternwood whose troubled daughter Carmen is being blackmailed by a man called Arthur Geiger, a bookstore owner. Her father also reveals that this is not the first time she has been blackmailed; previously a man called Joe Brody had also tried to extort money from her. Sternwood also mentions that his elder daughter, Vivian’s husband has disappeared. As Marlowe investigates further, he learns that Geiger is running a pornographic book business from his store and that he has compromising nude photographs of Carmen. The private investigator now enters a dark world of extortion and murder as his investigation takes him further and further into the seedy underbelly of Los Angeles in the late 1930s. Indeed, the city itself is an important character in this work. Few writers have as successfully evoked a city’s varying physical locations or its different social milieus: Philip Marlowe moves as successfully in the homes of the rich as in the dives of the poor in his quest for the truth. Marlowe is himself a complex character. He is physically tough, yet abhors violence and always does his best to avoid it. A loner but one who accepts human frailty and empathises with the vulnerable. He is also a sensitive soul beneath his tough exterior: he plays chess and shows an appreciation for poetry. Marlowe is an anachronistic figure in the harsh, sometimes nightmarish landscape of Chandler's Los Angeles, a knight errant working to save femmes fatales rather than damsels in distress. The private investigator also navigates his morally ambiguous world with a dark humour, often as black as pitch, and his witty asides are one of the great pleasures of reading this novel:

“It’s no racket for bums,” I told Brody almost affectionately. It takes a smooth worker like you, Joe. You’ve got to get confidence and keep it. People who spend their money for second-hand sex jags are as nervous as dowagers who can’t find the restroom. Personally I think the blackmail angles are a big mistake. I am for shredding all that and sticking to legitimate sales and rentals.

The wise cracking private investigator is now a cliché of much crime fiction, but Marlowe was the grandfather of them all and his humorous insights into life’s absurdities are as fresh as ever. If there is only one reason to read The Big Sleep along with the rest of Chandler’s fiction it should be for that wisdom alone.