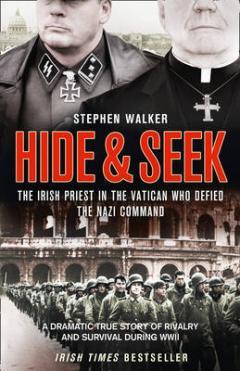 Hide and Seek: The Irish Priest in the Vatican Who Defied the Nazi Command

This is a thrilling account of the unbelievable but true exploits of the heroic Monsignor Hugh O'Flaherty, a Kerry born priest who saved thousands of Italian Jews and Allied troops and airmen from the Nazis during WW2. O'Flaherty cut his teeth as a young curate in the War of Independence in Ireland where he was actively involved in the struggle against the British, in particular the notorious Black and Tans.

Years later O'Flaherty served in Rome as a close confidante of the controversial Pope Pius XII. The Vatican faced with the brutal reality of Italian Fascism and German Nazism did not openly antagonize Hitler and Mussolini by explicitly condemning their murderous regimes deciding that such a move would be futile while endangering the church itself and those under its protection which Hitler and his henchmen sought any excuse to destroy. In 1943 after the attempted overthrow of Mussolini he was reinstalled as a puppet by the Nazis who invaded and occupied Italy.

The German SS police chief in Rome Herbert Kappler instituted a reign of terror infamously massacring hundreds of Italians in reprisal for a bomb attack on SS troops in Rome. As Himmler launched the Final Solution Kappler and his men rounded up Italian Jews who were to be murdered in Auschwitz while O'Flaherty risked his life to protect them moving fugitives between a network of safe houses and ultimately to the sanctuary of the Vatican City itself. O'Flaherty who often operated in disguise sometimes wearing German uniform became a prime target for the Gestapo but despite many close shaves was never captured.

In 1944 as Rome was liberated by the Allies Kappler himself a prisoner sought out O'Flaherty once again. Both men became friends and Kappler repented before becoming a Catholic. Described as the Irish Oskar Schindler (the famous Austrian Nazi who saved thousands of Polish Jews) O’Flaherty's exploits were largely unknown and forgotten in his native Ireland when he died in 1963. Walker’s book vividly recreates the terror of wartime Rome, a fascinating portrait of the enigmatic O'Flaherty and a story of the triumph of love over evil.
This book is available on borrowbox: https://fe.bolindadigital.com/wldcs_b…/…/productDetail.html…