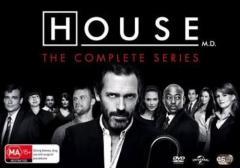 House MD is a comedy medical drama of exceptional originality. Stop right here if you think you're in for the usual ER patients, chatty nurses and dramatic doctors who care about every patient like their own children. No, House is a cynical, arrogant, pill-popping cripple and expert diagnostician with a love for puzzles and a talent for wreaking havoc, a tortured genius who refuses to take any case that doesn't spark his interest with unusual symptoms (such as luminous green urine or the sudden inability to form speech), cases no ordinary doctor can diagnose. House, along with his rotating team of doctors, all of whom come with their own baggage and their own unique personalities, search for the answer that will hopefully but not necessarily save their patient. From battling with his boss, Lisa Cuddy, over the most idiotic things, such as his need for a TV constantly playing reruns of General Hospital in his office, to pulling pranks on his best and only friend, Wilson, House’s deep lack of maturity adds immeasurably to the programme’s comedic value.

Adding to it also is the regular stint in the hospital’s public clinic forced on him by Cuddy (often as a punishment for bad behaviour such as opening a patient’s head without permission, or deliberately injecting them with malaria), whereby he must actually interact with mundane patients (usually while bandying about the word moron and insulting them repeatedly) and treat uninteresting symptoms lacking in mystery such as runny noses and broken fingers. The more deluded the patient is, the more fun it is to see House’s head trying not to explode and hear the sarcastic jabs tumbling out of his mouth.

Throughout the seasons we see House struggle with his addiction to Vicodin, the only painkiller that numbs the agonising pain in his leg, a result of surgical complications from an infarction in his thigh muscle that left him both disabled and with a cynical hatred for mankind. His life spent in constant pain has made him bitter and he goes around saying outrageous, horrendous things to everyone he comes across simply because he can. He always believes the worst in people in an effort to uphold his main principle: everybody lies.

This TV programme is fast paced, funny and sarcastic with witty dialogue and rife with plot twists. Once you get hooked it's terribly difficult not to binge watch all 8 seasons in the space of a week and pick up masses of random medical terminology on the way! Drop “paraneoplastic syndrome” into a conversation and see the reaction you’ll get. Just remember the one rule of the show - it's never lupus.

Staff Pick By
Nina
Was this information useful?