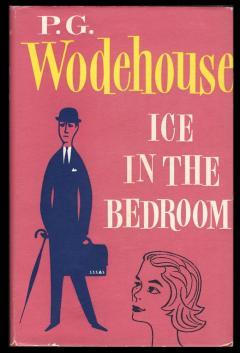 Ice in the Bedroom

In trying times we tend to seek comfort in the old and familiar, and boy have I been doing that lately. Amazingly, it was only last month I reviewed Robert Harris' apocalyptic novel, The Second Sleep, which, despite its chilling theme, seemed charmingly far-fetched. Cut then to my third week of social isolation, and the world appears to have tilted on its axis, if not disappeared from view altogether. It would be fair to say a certain ennui has set in. Time to bring out the big guns - by which I mean that tried and true antidote to the blues, Mr Pelham Grenville Wodehouse.

This is not a review in the pure sense, more a stroll down memory lane. As a teenager, while my friends were waxing lyrical about Lord of the Rings, I was happily immersed in my own alternative universe; one that was populated by pig-loving peers, long-suffering gentlemen's gentlemen, bone-headed clubmen with names like Pongo and Oofy, magnificently awful aunts and a surprising amount of golf - quite as fantastical to me as Middle Earth, with its orcs and hobbits. Wodehouse, though, is like Marmite - if you've developed the taste already you don't need to be apprised of the wonder and wit of this genius wordsmith. Evelyn Waugh put it best; "Mr Wodehouse's world can never stale. He will continue to release future generations from captivity that may be more irksome than our own. He has made a world for us to live and delight in". So where better to escape to, from this present irksome captivity?

Critics accused Wodehouse of putting the same characters into all his books under different names, to which he responded by putting the same characters into different books under the same names, believing that that would make them feel silly. Ice in the Bedroom, a riotous caper set in the idyllic suburb of Valley Fields, features married hoodlums Dolly and Soapy Molloy who first appeared in Leave it to Psmith, for which I hold a particular fondness, it being my first, or gateway, Wodehouse. But this just happened to be the first title I came upon when revisiting my collection - any of the master's 90 novels or 300 short stories will grant you access to a world of "sunlit perfection" (Stephen Fry).

While I'm here I thought I'd share my other "hacks" for our collective current predicament. Music, as we all know, soothes the savage breast, so after exhaustive research I've identified 2 songs that do it for me: Fleetwood Mac - "Don't stop thinkin' about tomorrow, it'll soon be here, it'll beee better than before..." and Madonna - "Cos we need a holiday, some time to get together to make things better...it would beee soooo niiice". Play loud and repeat as necessary. Also loving the retro feel of TV at the moment - the Soaps seem positively historical as they continue blythely to pretend COVID doesn't exist. Cue lots of shrieking at the screen to "for God's sake stop hugging, haven't yis heard of social distancing?!" I'm finding strange comfort in the philosophic ramblings of Karl Pilkington on The Ricky Gervais Show, the brilliant cartoon version of the naughties’ podcasts - I'm almost convinced that man is a seer. So there you go, proof positive that I need to get out more. Stay safe