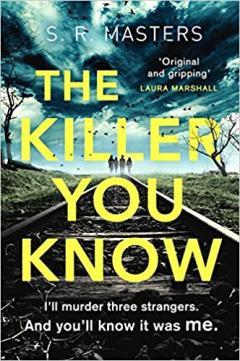 This debut novel from S.R. Masters is very nearly very good, but for me the author made a rookie mistake – he dragged it out just a little too long (423 pages in total) and I’d figured out the twist long before the end. It’s one thing building suspense gradually to keep the reader guessing, another to give the game away prematurely (even if the main protagonist is still bafflingly clueless) and then waffle on for chapters more before finally telling us what we’ve known for quite a while.

Having said that this is still an enjoyable read, in fact the denouement isn’t half bad for a suspense novel, most of which I find are let down by endings that don’t quite live up to their ingenious plots. What made me pick this up in the first place was the intriguing tagline “I’ll murder three strangers. And you’ll know it was me.” The premise is that five bored teenagers are thrown together one summer in the 1990s and forced to make their own entertainment. Before they go their separate ways one of them says that he will kill 3 strangers (because to be dubbed a serial killer you must murder at least 3 people) sometime in the future, and in such a way that the others will know it was him.

The story moves back and forth between 1998, when the teens were 16, and 2015, 16 years later – nice bit of symmetry there. The earlier action is played out around the claustrophobically tiny village of Blythe set amongst empty fields and railway tracks (shades of “Stand by me”) which adds to the brooding atmosphere, the feeling that there’s something “off” about the whole set-up. Is this because there’s a psychopath in their midst, is it something to do with the brutish neighbour, Mr Strachan, who seems always to be lurking in the shadows, or perhaps it’s the secrets that lie within the families of each of the five. When Will, the would-be serial killer, fails to turn up at the 16 year reunion the other four jokingly go online to check out whether he kept his promise, and are shocked to find that he may well have.

Masters writes particularly well about the closed-off world of adolescence, and conveys a fine sense of nostalgia through setting much of the story in an isolated area of rural England just before the explosion of the internet and social media. It has that gold-tinted veneer of a long bygone age, making it hard to believe it was a mere two decades ago. The nostalgia is deliberately ramped up by the many references to films of that era (Ghostbusters, Indiana Jones, et al.) and the author uses the uncertainty of memory that time and distance create to cast doubt and suspicion everywhere. All in all, this is a cracking read and a promising debut.