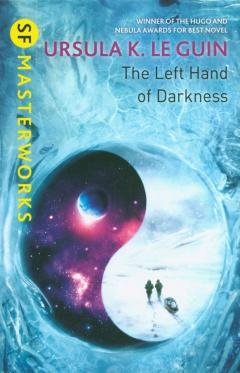 When "The Left Hand of Darkness" was published in 1969 it was a pioneering work of feminist science fiction, a radical exploration of identity and sexuality. Set in the far distant future, in Le Guin’s fictional Hannish universe which features in much of her fiction, it explores the struggles of Genly Ai, an envoy sent by the Ekumen, an interplanetary federation of planets, as he attempts to complete his mission on the planet Gethen (Winter). He is tasked with getting Gethen to join the Ekumen but is frustrated by his inability to understand shifgrethor, a sophisticated code of conduct behind which the planet’s inhabitants save face, and their androgyny. Gethenians are sexually latent for twenty- four days of a twenty- six lunar cycle, only becoming sexual once during that period, a time called kemmer when they adopt the characteristics of either sex. This biological fact has a profound bearing on both the social and religious beliefs of Gethen, a fact which takes Genly much of the novel to fully understand. The planet is dominated by two great powers, the kingdom of Karhide, ruled by a mad king, Argaven Harde, and Orgoreyn, ruled by thirty-three Commensals or counsellors, but in fact really dominated by the Sarf, its secret police. One of the few people on Gethen prepared to help Genly is Estraven, the Prime Minister of Karhide who works hard to get him an audience with the King. Genly eventually gets to meet the King only to have his mission rejected and to then learn that Estraven has fallen from power. He then explores Karhide in the spring, learning more of its religion, Handdara and then attempts to try his luck in Orgoreyn. Initially accepted by a faction of politicians anxious to improve their relations with their neighbour Karhide and intrigued by the possibility of an interplanetary alliance, Genly is then abandoned by them and sent to a prison camp. In the meantime, Estraven has slipped into Orgoreyn and learning of Genly’s fate, rescues him from the camp. In their trek across an ice sheet, dominated by volcanoes, both Estraven and Genly finally come to understand each other. This bare summary above hardly does justice to a novel in which Le Guin, the daughter of an anthropologist, drew on her wide reading to create an imaginary world as fully realised as Tolkien’s Middle Earth and Frank Herbert’s Dune. For example, the religion of Karhide, Handdara is a beautifully realised synthesis of Taoism and Buddhism. Indeed, Le Guin was later to go on to produce an acclaimed version of the Taoist classic, the Tao Te Ching. Taoism with its celebration of complimentary contrasts, such as light and dark and masculine and feminine dominates this and much of the rest of her work. The title of the work comes from the first line of a traditional song from Gethen:

Light is the left hand of darkness

and darkness the right hand of light.

Two are one, life and death, lying

"The Left Hand of Darkness" like the best of science fiction uses imagined worlds to examine issues important in the author’s own time and society. The issues of identity, sexuality, religious belief and political freedom that she explored in this work are as relevant now as in 1969, perhaps even more so.