Early Christian church sites are well distributed through Dún Laoghaire-Rathdown. Surviving instances include the remains of churches (Balally; Dalkey Island; and Kill o’ the Grange), enclosures (Balally; Rathmichael), stone crosses, both High Cross (Tully) and Fassaroe-style (Blackrock; Killegar; Rathmichael; and Kiltuck (now Shankill), as well as a wide example of religious sites including holy wells (Dalkey Island, Holywell Land, Dundrum; Tobernea (Blackrock); Jamestown), grave stones (including the Rathdown Slabs). Many of these sites were redeveloped in the 12 and 13th centuries, with the establishment of a diocesan and parochial structure of hierarchy following church reform. The region was now in the hinterland of Dublin and the Church came to own a lot of the lands in the area. The conquest of the Normans changed the basis of the legal, financial, political and land tenure practices of the country.

A common thread from medieval times has been the defensive position of the area for Dublin City. The area is dotted with castles (Dundrum, Monkstown, Shankill) with the principal threat coming from the granite mountains and hidden glens of the Dublin and Wicklow mountains. With a wild landscape belying its modest height, it represents Ireland’s largest upland area. It has served as refuge to outlaws and rebels, from the native Irish O’Byrnes and O’Tooles who raided the area for centuries, down to the aftermath of the1798 Rebellion.  A military road (the modern R115), garrisoned at intervals, was built in 1800-09. It ran from Rathfarnham to Aughavannagh, and established control over the whole area in the early eighteen-hundreds. The threat also came from the sea. A military camp established at Lehaunstown, overlooking Killiney Bay, in 1795 was at the centre of a network of local roads to counter French invasion. Further need for coastal defence opened up the area with the construction of military roads and 14 Martello tower batteries were constructed from Sandymount to Bray over a year and a half period.

The district’s popularity with modern tourists dates back to the eighteenth century, when it became popularly known as Ireland's Riviera. The wealthy built villas along the coast with evocative names, like Maretimo and Frascati, recall the Grand Tour. Visitors enjoyed the scenery and sea bathing, and availed of the coffee-house which was built mid-century in the town of Dún Laoghaire.

Once a small fishing village located on an inlet on the rocky coast S.E. of Dublin, Dún Laoghaire is now a major ferry port and yachting centre. The ruins of Laoghaire's fort which gave it its name survived until c. 1805, when one of the Martello towers was built on the site. This in turn was removed by 1838 to make way for the railway. 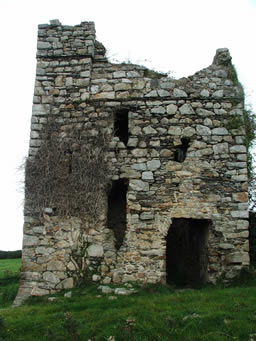