The coastal history of Dún Laoghaire-Rathdown is inextricably linked with seafaring exploits and maritime tragedies.

In 1766 two pirates, McKinley and Zeckerman, were hanged from Muglins - a rock to the north of Dalkey Island - for the murder of Captain Glass and his family on the high seas. On 18th of September 1789, Arthue Wellesley, the future Duke of Wellington, to meet a bet with Thomas "Buck" Whaley undertook to walk from the Irish five-mile marker stone at Cornelscourt to the Junction of Lesson St. and Adelaide Road in less than an hour. Achieving the feat of walking the six statute miles in 55 minutes, he was paid over the one hundred and fifty Guineas. Buck Whaley, a famous rake and member of the Hell-fire Club, had himself undertaken a more famous wager against the Duke of Leinster to travel to Jerusalem and back within a year. Leaving Dublin on 29 September 1788, he returned to Ireland in July 1789 to bonfires celebrating his sucess and collected his £15,000.

Fourteen Martello tower coastal batteries were built from Sandymount to Bray from June 1804 to December 1805 by Colonel Benjamin Fisher. A portion of the road build to link them became in time George's Street, the centre of the new town of Kingston.

In 1807, the tragic loss of two troop-ships, the HMS Prince of Wales and the Rochdale, with the loss of nearly 400 lives, prompted the construction of the present asylum harbour at Dún Laoghaire to serve ships approaching the port of Dublin. It was built and designed by John Rennie, a Scottish civil engineer, with granite from the quarries on Dalkey Hill and Glasthule. It transformed Dún Laoghaire’s position from a quiet seaside village to the sea-link to Britain. By the early nineteenth century, Dún Laoghaire was the fourth largest urban centre in Ireland. The steam packet service was transferred there in 1826, beginning the tradition which later led to Dún Laoghaire becoming Ireland's premier ferryport.

In 1834, Ireland's first commuter railway - linking Dún Laoghaire to Dublin - was completed, further contributing to the town's development.  This year Dún Laoghaire also received Town Commission status. It merged with Dalkey, Blackrock and Ballybrack in 1930 to become the Borough of Dún Laoghaire.

The Harcourt Street railway line ran for over a century from Bray through the old district of Rathdown.

It served the villages of Shankill, Carrickmines, Foxrock, Stillorgan and Dundrum until it was closed in 1959. The line prompted developers to build houses for the new middle classes seeking the healthy air of the rural county within commuting distance. Shankill has the unusual feature of a former post office building built ‘upside-down’ by the Harcourt line bridge,with guestrooms on the downstairs and kitchen and living room upstairs. The mansion called Contra, an architecturally important Victorian house, is similarly built up-side down.

Development of the suburbs of Dublin was led in Stillorgan. It had a series of Irish firsts. There was the first bowling alley in Ireland, in 1963. Ireland’s first modern shopping centre was opened here also in 1966 by Dickie Rock, the year he sang for Ireland in the Eurovision song contest. The first stretch of dual carriageway was also built there in the 1970s between the Stillorgan Road-Newtownpark Avenue junction and Foxrock Church.

In 1994 with the re-organisation of Dublin County Council, Dún Laoghaire-Rathdown County Council became the local authority for the area. The region of Dún Laoghaire-Rathdown has seen a change in appearance in the recent decades. Its suburban locales and once rural areas have been transformed with new roads, homes and other developments. The Southern section of the M50 was constructed between 2001 and 2005.

2004 during the Celtic Tiger boom saw the opening of Dundrum Shopping Centre, and the LUAS, along part of the old Harcourt Street line. The iconic William Dargan cable-stayed bridge was built to carry the new tramline. 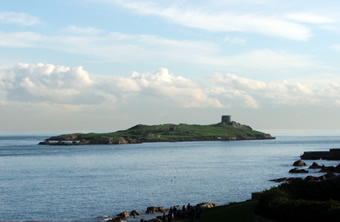