In 1821 the name Dunleary or Dun Leary was changed to Kingstown in honour of King George IV’s visit to this bustling and rapidly developing town. In 1920 it was officially given the name Dún Laoghaire, referring back to the original Irish name for Dunleary. It was a deliberate political act during the War of Independence, an act of defiance against the old order in Ireland. In the years following the establishment of the Irish Free State, the use of Kingstown gradually diminished and was replaced in the consciousness of visitors and residents of the town by variants of the name – Dunleary, Dun Laoire and Dún Laoghaire.

dlr Libraries acquired nearly 700 postcards of the Dún Laoghaire-Rathdown area from the sale of the Seamus Kearns Collection of Postcards in 2019. These images form the basis of a publication entitled What’s in a Name? Dun Leary – Kingstown – Dún Laoghaire: A Visual History, an accompanying onsite and online exhibition featuring a selection of these postcards and a series of talks and videos to mark the centenary of the name change. In addition, a Primary Schools resource featuring five Lesson Plans for teachers has been prepared by Séamus Cannon and Ríonach O Callaghan in association with Blackrock Education Centre. These Lesson Plans cover topics such as the origin of Dún Laoghaire, Martello Towers, the derivation of Early Christian and more recent Dún Laoghaire-Rathdown placenames, royal connections and growth of the harbour. A link to these resources for teachers can be found at https://www.scoilnet.ie/.

This initiative is supported by the Department of Tourism, Culture, Arts, Gaeltacht, Sport and Media as part of the Decade of Centenaries 2012-2023 programme. 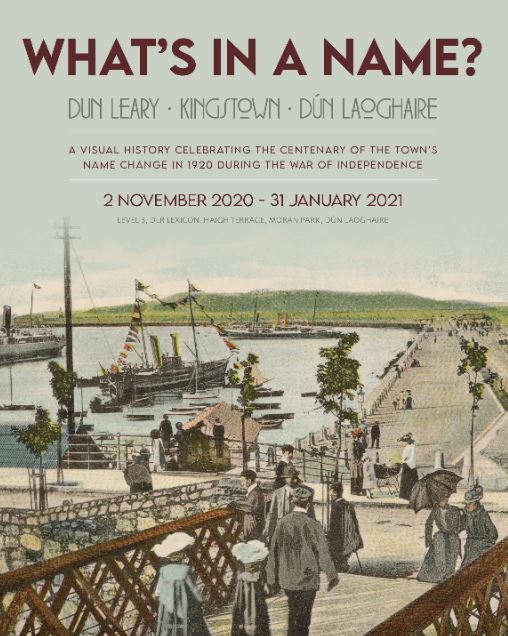