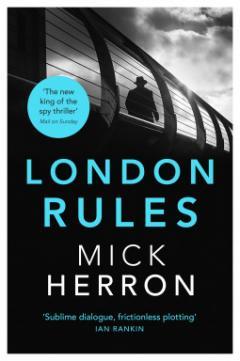 Well I’ve done it again – come late to a series and read the most recent instalment first and then had to go back to the beginning and read all the others in between to fill in the blanks. The fact that I did so is a huge compliment to Herron, particularly as the Jackson Lamb series is in the spy genre, which has never floated my boat. Those who do like their spooks, though, reliably inform me that this is subverted John Le Carre (the Master) territory. I wouldn’t know, all I can tell you is that London Rules is well-plotted, deeply satirical, topical (Brexit features) and occasionally shocking – you find yourself laughing hysterically while your jaw is dropping.
It helps that Herron has created a genius and (as far as I know) original premise on which to base these spy novels. A bunch of spooks who have all blotted their copybooks in diverse ways have been sent to Slough House, a kind of remedial branch of MI5, to contemplate their sins while filling in time doing scut work. Their boss is a shady character called Jackson Lamb, who is outwardly lazy, offensive (flatulence being his weapon of choice) and most of the time downright nasty - an old Cold War joe who has long since outlived his usefulness. Not so, of course, as everyone from the powers that be up in Regent’s Park to the resentful “slow horses” banished to Slough House would do well to remember – time and again it is Lamb’s machinations that pull the irons out of the fire in the nick of time. If anyone knows where the bodies are buried it’s him and he’s not afraid to use all means at his disposal to keep one step ahead of the myriad forces determined to bring him down, including those “down the corridor” (Parliament). Occasionally he even throws his considerable weight behind the hapless slow horses, though they are rarely grateful or even aware.
MI5 is portrayed as a shambolic, chaotic repository for psychopaths, egomaniacs and incompetents, best exemplified by a covert operation that ends with an aspiring prime minister inadvertently being killed by a tin of paint. James Bond these guys are not, but there’s plenty of action if that’s what you want, much of it of a ridiculous sort. But what I loved about this series is the snappy dialogue, most of it joyfully un-PC – one of my favourite exchanges was between two female and one bewildered male agent on the topic of Tom Hiddleston’s ass. I’ll be very surprised if this doesn’t make it to the small screen in the near future, they could recruit Tom to play River Cartwright, Slough House’s nearest (though not very) approximation to 007.