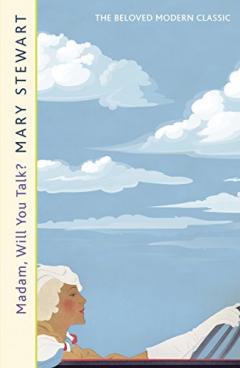 Madam Will you Talk?

Mary Stewart’s tales of adventure featuring intrepid heroines and square-jawed heroes have all but been forgotten now, and were probably even considered out-dated back when my mother passed on her dog-eared copies to me as a young teenager. But rereading them recently (as part of my on-going nostalgia kick) I felt again something of the thrill they once invoked in me. Long before I had ever been on a plane these books filled me with wanderlust and a determination to one day visit the locations of her most exotic thrillers.

This intriguingly titled one begins with our protagonist, Charity Selborne, (young, beautiful and with the slight whiff of tragedy about her) driving over a drawbridge into the walled town of Avignon to begin her holiday touring the South of France. Instantly you’re there with her, bathed in that golden southern light, listening to the hurdy-gurdy of the carousels, sniffing the garlicky air, watching the evening passeggiata over a digestif. This is what Stewart excels at, immersing the reader in her world so you feel that you’re experiencing it, not just reading about it. That sense of immediacy is all the more impressive when you consider that this was written in the early 1950s, a time I imagined to be stuffier and more constrained than today. But of course that generation of women, having recently come through the horrors of WW2, were no shrinking violets - in fact our demure heroine spends much of the novel tearing around the French countryside in her Riley, expertly outdriving and outsmarting her pursuers without smudging her lipstick or creasing her frock.

Not that she’s some kind of hard-boiled adventurer – Stewart’s women are of the peculiarly English, stiff-upper-lip variety who (typically on holiday from their teaching job) find themselves embroiled in nefarious goings-on and are forced to not only foil the baddies but “find” themselves into the bargain. If this sounds a bit too Enid Blyton - don’t worry, it’s not. Beautifully written, this is a thoroughly satisfying romantic adventure story, but can also be read as a superb piece of travel writing. Inspired by this book to put “Driving holiday in Provence” on my bucket list, I finally did it (kind of) some years ago. Having braved the hair-raising climb, albeit in a hire car as a passenger, up to Les Baux (a ruined medieval village high up in the mountains, scene of dramatic events in the novel), I gained a new respect for Charity’s driving skills, and an even greater appreciation of Stewart’s descriptive skills – Les Baux, the Pont du Gard, Nimes, Avignon, etc., were all pretty much as she’d portrayed them, despite the time lapse. Unfortunately I missed out on seeing another key setting in the novel, Marseille, as, failing to take into account that the map might have changed slightly since Mary Stewart’s time, we sailed happily past on the motorway without so much as a glimpse of Europe’s busiest seaport.