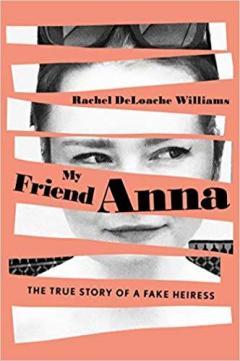 My Friend Anna: The True Story of a Fake Heiress

I don’t really know what I was expecting from this, an account of the author’s friendship with and ultimate betrayal by the so-called “New York Grifter”, Anna Delvey (aka Sorokin). Maybe something on the lines of “Catch me if you can”, the story of teenage fraudster Frank Abagnale who could make people believe he was anything from a pilot to a doctor, or that of Anna Anderson, a Polish factory worker who fooled half the world into thinking she was the Grand Duchess Anastasia of Russia. Now that’s chutzpah – but if I was hoping for some here, I was sorely disappointed.

For this is essentially a sad little tale of a spoilt, probably sociopathic wannabe and her less-than-interesting enabler - despite the title I hesitate to use the word “friend”. Williams was scammed to the tune of 60K by Sorokin during a holiday in Morocco, and had to “endure” months of texting Sorokin and her bank trying to sort out the mess, all of which she faithfully transcribes here, complete with emojis. There’s incessant excuse-making; “I was just keeping her company at the exclusive gym/ luxury resort/ celebrity hangout - she would have been paying anyway”. Despite being indicted on various charges of larceny, Sorokin was not found guilty of theft from Williams for the fateful trip to Morocco. The fact is, as Williams was also there enjoying the amenities, it’s a legal (and moral) grey area.

I’d have had more sympathy for her if she’d appeared to enjoy the supposed high life she was living with Sorokin. The sheer banality is mind-boggling; sitting side by side staring at their phones while having pedicures, taking infrared saunas (akin to being microwaved apparently!) while drinking wine (but having to stop because of dehydration), dining on sushi (first instagramming it, of course), which the author decides to try so long as there are no suckers – I’d like to think there was irony there but I doubt it. Anyone relating this account of their day to me would have been sarcastically advised to save it for their memoir – oh right.

The truth is that this would-be master criminal fooled very few and repelled many – her constant taking of pouting selfies alone would have brought me out in hives. She was found not guilty of attempting to defraud banks out of $22 million, for the simple reason that no-one in their right mind would have given it to her. So inept a fraudster was she that apparently New York society women were sceptical of her bona fides, having clocked her flat, uncoiffed hair. Which made me marvel at how much Williams was prepared to swallow to get some free sushi (with or without suckers). The best thing to come out of this sorry saga was a short-lived proliferation of t-shirts on the streets of New York with slogans such as “My other shirt will wire you $30,000”. Anna must surely approve from her prison cell – validation from the hipster crowd at last.