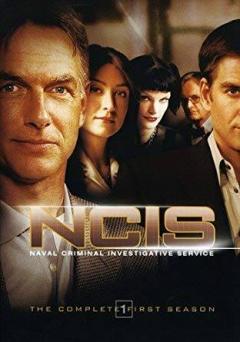 In case anyone was wondering why I’ve done no reviews recently (I’m sure it’s kept you up at night) this is the reason: NCIS (Naval Criminal Investigative Service, to you), which seemed to appear fully formed on my telly from the US, already on its 15th season, sometime in the last year. But maybe it was there all along and I was put off by the American military connotations or bored by the thought of yet another police procedural.

However, intrigued by the quirky trailers on Fox, I approached an episode with some trepidation and was hooked from the very first Gibbsian utterance of “Let’s go, team, we’ve got a Dead Marine”. This is basically the entire premise of NCIS, each episode begins with Special Agent Gibbs (played by the still rather cute Mark Harmon) striding through the orange-painted HQ (one of many in-jokes), stopping to slap Special Agent DiNozzo around the back of the head (I know!) to huskily deliver his line. Don’t worry, though, the rapidly expanding pile of dead marines (the American Navy being a bit like Midsummer in that respect) is only a backdrop for the real action – the in-fighting, flirting & camp competitiveness of the NCIS team, with some dark brooding and hints of a shady past thrown in from the Gibbs quarter.

What stops this from veering into “Criminal Minds” territory is the engaging personalities of the agents (and mercifully less women being tortured in dank basements). There’s sycophantic lady’s man, DiNozzo, whose charm allows us to forgive his relentless bullying of hapless “proby”, Magee, and whose knowledge of movies is used to illustrate every occasion, Ziva David, on loan from the Israeli Mossad, who kills men with her bare hands and whose tenuous grasp of English idioms is the basis of much comedy, and Abs, goth-girl and forensic scientist extraordinaire, who seems to be kept going in her dank basement by energy drinks and cheek-kisses provided by her boss (again, I know – does NCIS have a HR department?)

But I think my favourite might be the lovable, garrulous Dr Donald “Ducky” Mallard played by David McCallum (who some might remember as The Invisible Man) – you can tell he’s having the time of his (later) life in the part and it’s great to see so many older actors getting a chance to ham it up here.