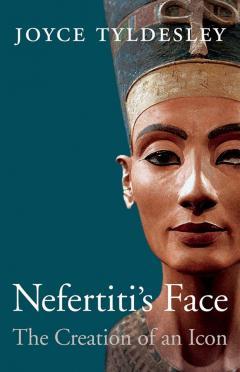 Nefertiti’s Face: The Creation of an Icon

I have been fascinated by Ancient Egypt since visiting my local museum as a child; a similar experience in Bolton Museum set Joyce Tyldesley upon her career as an Egyptologist and writer. This museum also boasted a reproduction of the famous Nefertiti bust, so Tyldesley’s search for the mysterious queen first began. She has written extensively on various aspects of Ancient Egyptian history, including Cleopatra and Hatshepsut, the female Pharaoh as well as a previous book on Nefertiti.

This book is based around the discovery and subsequent history of a beautiful bust of Nefertiti (mother-in-law of Tutankhamun), uncovered on a dig in 1912. This very readable book is divided into two sections, first a discussion of what we know about Nefertiti’s life and her representation in art discovered so far. The author looks at the evidence for Nefertiti’s life as a consort of Akhenaten in the city of Amarna, which was situated on the East bank of the Nile. The next section brings us up to date with a look at the queen’s subsequent recreation as a modern cultural icon. The bust in question is a beautiful artwork, a stone sculpture, with a layer of plaster on top and a stylised representation of the queen painted over this in (still) vibrant colours. Tyldesley obviously loves her subject and she is able to bring the ancient world alive, while at the same time acknowledging that there is much that we do not know for sure.

The second part of the book deals with the bust’s second life as a cultural icon in Berlin, where it has remained since 1912 after its discovery by Ludwig Borchardt, conducting an authorised dig at Amarna. As was the custom of the time, a proportion of the finds went to the person funding the dig (James Simon, a German entrepreneur and philanthropist) and the rest to the Cairo Museum collection. Simon then donated the bust to the Neues Museum in Berlin. Nefertiti has remained in Berlin ever since, though her life has been somewhat adventurous at times due to World War II and the subsequent partition of Berlin. Since her unveiling in Berlin, she has also been the inspiration for art projects and fashion and her image is known throughout the world due to reproductions of the plaster bust.

The artwork’s life in Berlin has raised questions over the appropriation of cultural artefacts and its return to Egypt has been requested on several occasions. However, as Tyldesley points out, ‘It is her sojourn in Germany that has made Nefertiti the celebrity she is today’. It still an unresolved issue and looks to remain so for some time to come, not least due to the artefact’s age and fragility.