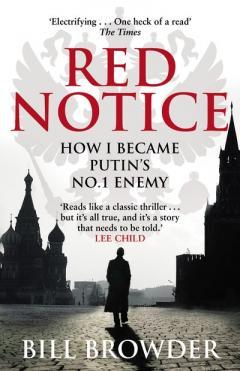 Red Notice: How I became Putin's No.1 Enemy

One man’s struggle to expose the corruption at the very heart of Russia’s political system.

This book is both political thriller and exposé of the dark world of corruption in the aftermath of the Soviet Union collapse. Browder shines a light into the workings of a dysfunctional system where backhanders and bribes are common place and brutality is second nature. Political skulduggery all the way from the heart of The Kremlin to the Russian Oligarchs.

Step aboard Bill Browder's runaway train as it takes its perilous journey through the workings of high finance and bond markets in Russia from the mid 1990s to the mid 2000s. Join Bill for a ring-side view of his life as a high-flying hedge fund manager in Moscow amassing a huge fortune and his subsequent fall from favour with the powers that be. Brace yourself for a chilling read, prepare to be shocked by the story of Bill’s fight to unmask the ugly truths of a new Russia and the tragic and fatal consequences this had on him and one of his business associates.

Staff Pick By
Patricia
Was this information useful?