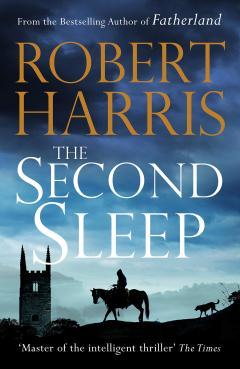 I picked this book up because I quite like a historical murder mystery, which both the cover picture and the first few chapters seemed to promise. A young priest, Christopher Fairfax, is travelling across Wessex in the year 1468 to officiate at the funeral of a fellow clergyman based in a remote parish on the edge of the diocese. Conceive, then, of my gobsmackedness when our protagonist, passing the night in the austere bedchamber of the late Father Lacey, comes across a shiny rectangular object and turns it over to find a strange symbol, an apple with a bite taken out of it, etched into the back. I confess it took a second or two for the penny to drop, possibly because I have an android phone, but when it did I swear I got chills. This is not a spoiler as obviously Harris didn’t mean for the reader to remain in the dark for long. In fact, I feel he could have ramped up the shock value to a really spectacular extent had he not embedded clues in the form of anachronisms from the outset – a parakeet flying out of the undergrowth, a modern glass ink bottle, a long-case clock. Also, I’d have had Fairfax discover the iPhone before he saw the other artefacts from the “Elizabethan” era - the plastic cutlery, bank-notes, etc. – much more satisfying!

Anyway, enough unsolicited advice to the bestselling author, Robert Harris – so just what is going on here? It transpires that 800 years ago in 2025 an apocalypse occurred as a result of the “ancients’” hubris and blasphemy in worshipping technology instead of God, though nobody knows which particular catastrophe befell our civilisation. According to a letter written by an unusually prescient physicist in 2022 threats included climate change, a general failure of computer technology and a pandemic resistant to antibiotics, all frighteningly apposite. One observation struck me particularly; “Thirty years ago the average British household contained enough food to last eight days; today the average is two days. It is no exaggeration to say that London, at any time, exists only six meals away from starvation.”

Determined not to forget how humanity was smited for its worship of false Gods, the survivors reset the calendar to the year 666 (the number of the Beast). Thus began another Dark Age, the second sleep of the title - a brilliant premise for a dystopian novel. I found some details less than convincing – it’s mentioned at one point that London used to be a melting pot of different races, so how did they end up with a homogenous white Anglo-Saxon society? Did no feminists survive either? How did the class system of the ancient world cross over into this one, in the person of Lady Durston? However these are just personal niggles - Harris, rightly not wanting to bog down the action with too much exposition, has produced a unique and thought-provoking thriller where not only the ending, but the beginning, is unknown.