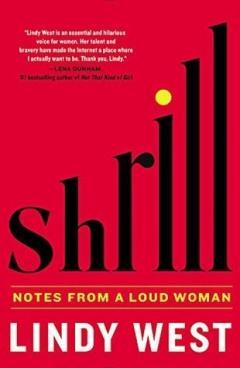 Shrill: Notes from a Loud Woman

Until I came across a recommendation by the author Madeline Miller in The Guardian, who said this book is “Hilarious, keen-edged, wonderful”, I had never heard of Lindy West. That may be because of my avoidance of the broiling mass of ignorance and ill-will that largely informs the world of online social commentary. I fear my head will blow off with rage if I go anywhere near it, frankly. And having read this I have no idea how Lindy West has to date kept hers intact.

She says; "I hear a lot these days about the lazy, aimless 'millennials' – about how all we want to do is sit around twerking our iPods and tweedling our Kardashians – and I also hear people asking, 'Where is the next generation of the social justice movement? ' Dude, they're on the internet." And I get that, but, as a committed self-preservationist, I like to keep informed the old-fashioned way with full benefit of publishers, editors, etc. Hence, this book, which for me was the literary equivalent of a kick in the you-know-what.

I was expecting it to be a laugh-out-loud collection of observational pieces - fine by me - but this is much more. West takes a comedic approach to serious issues, and so damn good is she at this writing lark that by the time she was in full cry against casual misogyny and trolling on the internet, I was still tittering at the puberty and period-related vicissitudes related in chapter one.

Ironically for this “Loud Woman”, West grew up pathologically shy, with body image issues. She began her journalistic career before the ubiquity of social media, when the worst she had to contend with was being called a “hipster douchebag” in the comments section. Once her image was easily available online she was subjected to vicious trolling, and this, along with her interest in stand-up comedy, forced her to confront issues that hit close to home, specifically fat-shaming and misogyny disguised as comedy.

This book is a timely call to arms – as West argues “Culture moulds who we are, but it’s ours to remould in turn”.