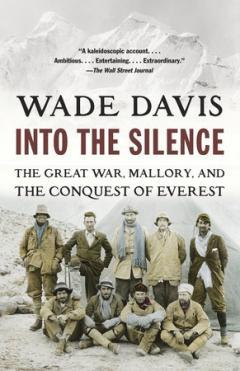 Into The Silence: The Great War, Mallory and the Conquest of Everest

An engrossing and superbly researched book. 'Into the silence' accounts the three failed attempts by British climbers to conquer Mount Everest, the highest point on Earth, in the early 1920s. This culminates in the deaths of George Mallory and Andrew "Sandy" Irvine high on the mountain, last seen only a few hundred feet below the summit and pushing for the top. Debate has raged every since as to whether or not the pair summitted the mountain but one thing is sure, they did not return.
This book is so much more than a book on mountaineering, it is a group biography of the men involved, a study of World War 1 and it's psychological impact, a study of the age of exploration and imperial decline.

One of the men on the expedition, looking up at the summit of Everest and not knowing the fate of Mallory and Irvine wrote in his diary:
“That night and with that scene in front of one, it was quite easy to realise that the price of life is death, and that, so long as the payment be made promptly, it matters little to the individual when the payment is made.”

Staff Pick By
Kevin
Was this information useful?