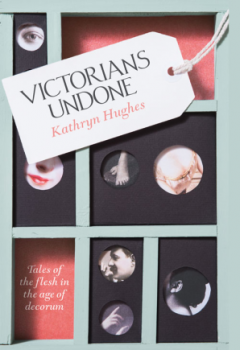 I’m a bit at a loss how to describe this hugely entertaining book, a collection of biographies of 5 well-known personages of the Victorian era, filtered through various body parts. For example we have Lady Flora’s belly, George Eliot’s hand, Charles Darwin’s beard, and so on. Sounds bonkers but this, the book’s USP, allows Hughes to bring us closer than your average biographer to her subjects, much like celeb magazines do nowadays.

Hughes says she longs to know what people in the 19th century were actually “like”, that though we are told about their “battles, their big love affairs and their little meannesses” shouldn’t we also know what it feels like “to catch sight of them across a crowded room, or to find yourself sitting next to them at dinner?” Of course, looking back at these Victorian celebs from the vantage point of the Instagram era, where we can’t get enough of the pregnancies and plastic surgeries of the rich & famous, we expect no less. But this book doesn’t just satisfy prurient curiosity, it uses carefully selected physical characteristics as a device to look at attitudes and prejudices associated with the Victorians, and asks; how different to them are we really?

We kick off with Lady Flora Hastings, unmarried lady-in-waiting to Queen Victoria at the outset of her reign, whose mysteriously swelling belly caused much raising of eyebrows, the fall-out from which almost scuppered Victoria’s reign before it had barely begun (her horrible death from stomach tumours effectively putting an end to the speculation). This account, though, is less about the unfortunate Lady Flora than it is about the young queen. In a series of devastating (and very funny) descriptions the author paints a vivid picture of the 18-year-old Victoria as a pouting, self-absorbed, comfort-eating teenager, addicted to court gossip, jealous of the older, sophisticated Lady Flora, furiously detailing imagined slights in her diary and nursing an embarrassing crush on that old roué, Lord Melbourne. Not too different from many of today’s millennials, then. Luckily (or not) Victoria, relieved at surviving this early brush with notoriety, cleaned up her act and fell for the (previously unnoticed) charms of the stolid Prince Albert and turned her reign into a by-word for virtue and family values – an early example of successful reinvention.

Then there’s Fanny Cornforth’s mouth, a cheeky symbol for the dubious morals and adolescent humour of those original frat boys, the Pre-Raphaelites. And poor old George Elliot, whose large left hand supposedly points to her lower-class, rural roots, but also allows for a discussion about her extreme ugliness, and how this would have impacted on her writing, reputation and love life. The final chapter, about the origin of the phrase “Sweet Fanny Adams”, shines light on another, darker, aspect of Victorian life – and as a tale of the macabre leaves Criminal Minds et al in the ha’penny place. Forget Heat – for scandal and sensation aplenty, read this!