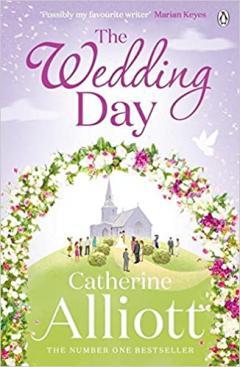 I’m still doing rose-tinted nostalgia this week, choosing another old favourite to review. Who knows, I might yet be shamed by those YouTubing self-improvers into having a crack at Ulysses, but for the moment I’m happy staying firmly in my comfort zone. Alliott is often dismissed as a writer of frivolous chick-lit but, while I’m not suggesting she’s up there with Joyce, I believe she can hold her own with Townsend and Fielding, and, dare I say it, acclaimed male comic writers like Simsion, Hornby or even Wodehouse himself.

One of the reasons I’m a fan is I have, if not grown up with her heroines, at least grown older with them. Her first book The Old Girl Network featured an outrageous anti-heroine, who like myself was single and in her early 20s and whose life, though way more exciting, somewhat echoed my own. Since then Alliott has obligingly produced a novel a year, and as she (and I) have matured, so have her Pollys, Rosies and Harriets. The same is true of her themes, her later books being more concerned with marital and family tribulations than disastrous dates and wardrobe malfunctions. But though older, Alliott’s heroines have not become necessarily wiser, at least not until she’s put them through their paces.

At the start of The Wedding Day Annie O’Harran is doing her best to rebuild her life after a painful divorce from her feckless ex, Adam, for whom she still has feelings. In order to provide for herself and her 13-year-old daughter, Flora, she is attempting to kickstart a career as a writer of bonkbusters. Enter dashing doctor, David, who appears to tick all the boxes. Thoughtful, kind, literally a life-saver, surely he’s just what Annie needs at this stage of her life? But this being a Rom Com (I prefer that term than the pejorative Chick Lit) the path of true love was never going to be smooth, and the wedding day of the title seems ever more distant as Annie unexpectedly finds herself with abundant romantic possibility. Alliott doesn’t give the game away too early - you’re never sure which of the love interests will be left standing once the dust settles, and which will reveal feet of clay - but you can always rely on the ending to be not only happy but 100% right.

But that’s just the Rom - on the way to the thoroughly satisfying conclusion we’re also treated to some serious Com. Alliott’s books always contain a fabulously funny vignette or two - here we have the carwash scene, a triumph of slapstick comedy, not an easy thing to pull off in written form. Then there’s Annie’s attempts to sex up her novel at the behest of her publisher - I literally howled with laughter. Add in the gorgeous Cornish setting, which transported me straight back to last year’s summer holiday (the memory of which will have to keep me going for the foreseeable) and I’d have to say this is the perfect COVID read.